Hoyt Wilhelm was one of the all-time great relief pitchers in baseball. He pitched in 1070 games, while only starting 72 games (mostly between 1958-60). He was best known as a knuckleball pitcher, which contributed to his long career. He finished his career with the most wins as a reliever (124), and was the first pitcher to reach 200 saves and 1000 games.

Wilhelm began his minor-league career in 1942 at age 20. After one season in class-D ball, he missed the next 3 years while in military service during World War II. He returned from the war to pitch another 6 seasons in the minors, the first two with the same class-D team from 1942, before working his way up to the triple-A level. 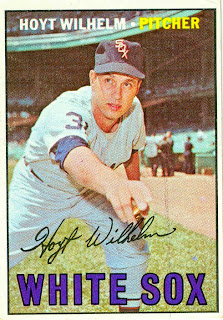 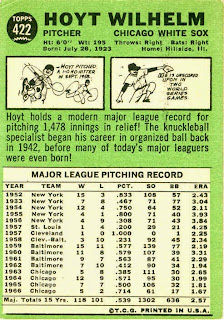 In 1953, he again led the league in games pitched (68), and made his first all-star team. Wilhelm continued to head up the Giants’ bullpen through the 1956 season.

Hoyt was traded to the Cardinals before the 1957 season for Whitey Lockman. He pitched in 40 games for the Cards, then was claimed off waivers by the Indians in the final weeks of the season. Wilhelm remained with the Indians for most of 1958, primarily relieving but making a few starts as well.

In August he was claimed by the Orioles. Wilhelm pitched for the Orioles from August 1958 through the 1962 season. 1959 was his only season as a full-time starting pitcher. He compiled a 15-11 record that season, along with posting a league-best 2.19 ERA and making his 2nd all-star team. While an Oriole, he also made the ’61 and ’62 all-star squads.

In January 1963, Hoyt (at age 40) was traded to the White Sox (along with shortstop Ron Hansen, 3rd baseman Pete Ward, and outfielder Dave Nicholson) for shortstop Luis Aparicio and outfielder Al Smith. Except for 3 random starts in 1963, Wilhelm switched back to being a reliever for the remainder of his career. He pitched the next 6 seasons for Chicago, and posted an ERA under 2.00 in each of his last 5 seasons with the Sox.

After the 1968 season, Wilhelm was drafted by the expansion Kansas City Royals, but quickly traded to the Angels for OF/C Ed Kirkpatrick. That September, California shipped him (and pitcher Bob Priddy) to the Braves for outfield prospect Mickey Rivers.

Hoyt pitched for the Braves for the remainder 1969 and most of 1970, until he was claimed by the Cubs late in 1970. After the season, Chicago traded him back to the Braves, essentially renting him for their failed stretch run against the Pirates.

Wilhelm was inducted into the Hall of Fame in 1985.

Really Dodgers! Five days before the big 5-0? You could have had a huge party.