Hart was signed by the Giants in 1960, and played in their farm system from 1960 to 1963. He was primarily a 3rd baseman, but played only shortstop and outfield in 1961. In 1963, Hart was called up to the Giants twice: he started both games of a doubleheader on July 7th, and also started 5 consecutive games in mid-July. 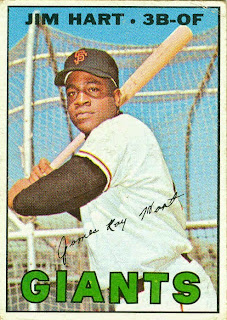 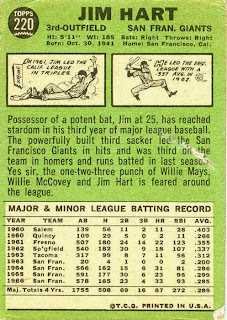 Jim made the Giants’ squad at the start of the 1964 season. He took over the starting 3rd base job from veteran Jim Davenport, who had been the team’s regular 3rd-sacker from 1958 to 1963. As a rookie, Hart started 145 games at third, banged 31 homers, and collected 81 RBI along with posting a .286 batting average. That was good enough to finish a distant 2nd in the NL Rookie of the Year voting (garnering 1 vote to Dick Allen’s 18 votes).

In 1967, his defensive short-comings came to a head. Although Hart began and ended the season at the hot corner, during July and August he was moved out to left field (forcing Jesus Alou to co-exist in right field with Ollie Brown) while the Giants worked out the veteran Davenport and rookie Bobby Etheridge at 3rd base. The defensive shuffling didn’t affect his bat, as he finished with more than 90 RBI for the 3rd consecutive season, while clubbing 29 homers.

His career began to wane in 1968. Jim split his time between his 2 positions that season, then only started 71 of his 95 games in 1969 – surprising since the Giants had lost outfielders Alou and Brown in the expansion draft.

Hart continued to lose playing time over the next several seasons, and spent the first half of the 1970 and 1971 seasons, and most of 1972 in the minors. He began 1973 with the Giants, but after 1 game was sold to the Yankees. Now in the AL, Hart was able to DH (which he did for 104 games). The Yankees assigned him to the minors in 1974, then released him in early June.

Posted by Jim from Downingtown at 9:43 PM

Growing up my best friend and his father were big-time Giants fans and both had Willie Mays for their favorite. I went to many Mets-Giants games at the Polo Grounds and Shea with them. I 'adopted' Jim Ray Hart as my player to root for just because I loved his name.

I hadn't thought about him in ages.

This guy always intrigued me. Hitting all those home runs through the 60's then ending up back in the minors after almost a decade