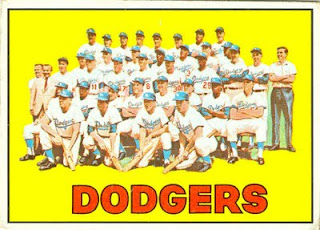 
Next team review: Baltimore Orioles
.
Posted by Jim from Downingtown at 1:13 PM

Only 4 airbrushed photos in the set, huh? I guess that's one of the reasons the '67 set so appealing (despite all the capless players!)

Firstly, the Dodgers cards look particularly good -- love the red. Secondly, Jim Hickman is remembered by Cubs fans for his role on the late sixties early seventies teams. He was an all-star in 1970.

I added a link to those other airbrushed cards about the same time that`you commented.

One of the better capless cards in 1967 is this one, but I also like these old school shots.

You forgot "releasing Dick Stuart" in your end of an era lament! :)

The Dodgers were one of the few teams (also Yankees, Giants, Cubs) that kept their 1966 Topps' color scheme in 1967.

Boy, that Sutton kid had some ears on him, didn't he?

I learned on "Ken Burns' Baseball" that little-league champ Jim Barbieri threw out the first ball in the 1954 World Series game where Willie Mays made "The Catch".