Here is the final card for Ralph Terry (#59). Aside from the Billy O'Dell card, this is probably my shabbiest 1967 baseball card. This is from the 1st-series, which was sold about a month before I started collecting baseball cards. I acquired these earlier cards from other neighborhood kids by "shooting" for them. (We would stand a card up against a wall, and take turns firing cards, like frisbees, at the standing card. Whoever knocked the card down kept all the cards on the floor.) This card appears to be a victim of that game.

Terry played in the Yankees' minor-league system from 1954 to 1956, and made his major-league debut on August 6, 1956. In June of 1957 he was traded to the Kansas City Athletics. Two years later, he was traded back to the Yankees, where he had his best years. 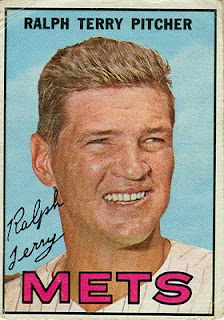 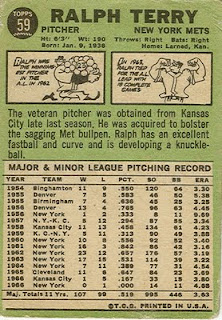 Ralph had a sub-par season in 1964, and immediately after the conclusion of the World Series, he was sent to the Indians to complete an earlier deal where the Yankees acquired pitcher Pedro Ramos. Terry bounced back with a winning season in 1965 for the Indians, but his best days were clearly behind him.

Just days before the 1966 season, the Indians traded him to the Athletics for pitcher John O'Donoghue. In early August, he was sold to the Mets, where he was used in the bullpen.

The Mets released him after the season, then (I assume after not finding anyone better) re-signed him a week before the start of the 1967 season. After appearing in only 2 games during the first six weeks of the season, he was released by the Mets again, ending his 12-year career.
Posted by Jim from Downingtown at 3:07 PM