Bill Bryan, a journeyman catcher, was signed by the Kansas City Athletics in 1960, and spent his first 4 seasons in the minors, with occasional call-ups to Kansas City. 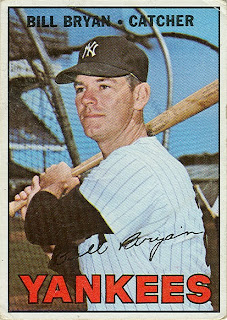 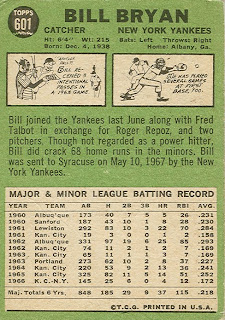 In 1966, Bryan began the season alternating starts with rookie catcher Ken Suarez, but in late May, the newly-acquired Phil Roof took over and started nearly every game for the rest of the season. After appearing in 32 games (and starting 14 games), Bryan was traded to the Yankees in mid-June along with pitcher Fred Talbot for pitchers Bill Stafford and Gil Blanco, and outfielder Roger Repoz (one of the many Yankees' young outfielders designated as "the next Mickey Mantle").

With the Yankees, Bryan was firmly entrenched as the 3rd-string catcher behind Elston Howard and Jake Gibbs. He only made 13 starts, and appeared in 14 other games as a pinch-hitter.

1967 found Bryan back in the minors for the first time since 1963. This late-season card includes a note that he was sent to triple-A Syracuse on May 10th. He only played 1 game for the Yankees in 1967. After the season, he was selected by the Senators in the rule 5 draft.

He started 28 games in 1968 as the Senators' 3rd-string catcher behind Paul Casanova and Jim French, and also played with triple-A Buffalo. He spent the 1969 season with Washington's triple-A team in Buffalo, and in 1970 played for the Phillies' single-A team in Spartanburg, SC.
Posted by Jim from Downingtown at 9:04 PM