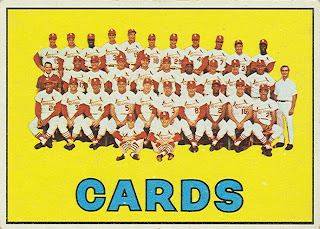 I liked how my Phillies' post from early last week turned out, so I'm going to post some other teams in this format too. Today it's time for the World Champion St. Louis Cardinals. The Cardinals clinched the NL pennant in mid-September, in spite of Bob Gibson missing 7 weeks with a broken leg.

Starting pitchers: Back in the day (and for all these years), I thought the Cardinals' rotation in 1967 was Gibson-Briles-Carlton-Washburn. Well, that's about what it was by the end of the season, but it started out as Gibson-Washburn-Jaster-Jackson, with Steve Carlton as the 5th starter. In early May, it was adjusted to Gibson-Washburn-Carlton-Hughes-Jackson, and in June, Larry Jaster had replaced Al Jackson as the 5th starter.

It appears that Ray Washburn missed 4 starts while on the DL in June/July, and Jim Cosman was called up take Washburn's starts.

In the July 15th game against the Pirates, a line drive off the bat of Roberto Clemente broke Bob Gibson's leg, and he didn't return until September 7th, missing 10 starts. The following day, Washburn returned to action, and the Cardinals also acquired relief pitcher Jack Lamabe from the Mets.

Nelson Briles was also moved from the bullpen (where he had been since the start of the season - making 35 appearances) to the starting rotation, replacing Gibson. When Gibson returned in September, Jaster was bumped from the rotation. So we end up with Gibson-Briles-Carlton-Hughes-Washburn.

Relievers: Southpaw Joe Hoerner was the team's closer, and along with Ron Willis and Hal Woodeshick, were strictly relievers. Al Jackson spent all of June to September in the bullpen, and Larry Jaster pitched in relief during most of May and September. Jack Lamabe was acquired from the Mets the day after Gibson's injury, and appeared in 23 games - all but 1 in relief.

Regulars: Except for Curt Flood missing 20 consecutive games in July, this starting 8 pretty much went wire-to-wire. I wonder if Mike Shannon was in the National Guard, because he missed several blocks of games in April, May, and August. (Shannon had been the team's right fielder prior to 1967, but switched to 3rd base upon the arrival of Roger Maris.) Tim McCarver and Roger Maris also got frequent days off, but Orlando Cepeda, Dal Maxvill, and Lou Brock all played over 150 games.

Primary subs: Phil Gagliano was the primary backup at 2B and 3B. It appears that Ed Spiezio was used mainly for pinch-hitting, and rarely entered a game as a defensive replacement. His few starts at 3B came mostly when Shannon was either out of the lineup or playing outfield in Flood's absence.

Bob Tolan was primarily used as the backup CF/1B, and for pinch-hitting, but played corner outfield occasionally. Alex Johnson was Maris' backup in right field, and was used as a pinch-hitter as well. He rarely played left or center field.

Other subs: Johnny Romano was the backup catcher early on, but even though he was on the team all season, he rarely played after the first week in June.

Dave Ricketts appears to have been with the team the entire season, but went 22 days without an appearance in late July, so maybe he was "DL-ed" to make room for an extra pitcher. He was strictly used as a pinch-hitter until late June, when he began getting time behind the plate.

Ed Bressoud was acquired from the Mets just before the start of the season, and was the backup shortstop, while getting the occasional start.

This late-series card shows Ted Savage as a Cub, but he began 1967 with the Cardinals, then was sold to the Cubs on May 14th. Before that, he had made 9 pinch-hitting appearances, but did not play in the field.

After examining the Cardinals' roster day-by-day, there doesn't appear to be any way to fit these 26 players (everyone above except Cosman and Lamabe) on the roster at the same time, but the records in Baseball-reference.com and Retrosheet.com imply that all 26 were active prior to Savage's exit.

Others: Mike Torrez pitched in a few games in September. (2B Steve Huntz and SS Jimy Williams also played a game or 2 in September.) It seems like "Al" Schoendienst has managed/coached/mascotted the Cardinals since time began! Brock and Flood were top-notch outfielders. Pat Corrales did not play for the team in 1967. (Who needs a 4th catcher?)


Post-season:
The Cardinals finished the season with 26 postseason-eligible players (all but the demoted Jim Cosman and the traded Ted Savage). Who was the odd man out? It's hard to say, because 10 pitchers and only 13 position players saw action in the World Series. Al Jackson, Alex Johnson, and Johnny Romano did not play in the series, but 2 of them must have been on the roster. We can probably assume Johnson was on the team as the 5th outfielder, but did the Cardinals go with 11 pitchers, or 3 catchers? I'm guessing 11 pitchers, based on Romano having only played 2 games after July 23rd.


Do you have a favorite team you'd like me to post next? I know there are Cubs, White Sox, Dodgers, and Orioles fans out there. I'll take requests, otherwise I think the Red Sox (as AL champs) will be next.
.
Posted by Jim from Downingtown at 6:43 PM

...and it's nice to see a post that mentions Jim Cosman. Here is what I wrote about him, and there is even a comment from a childhood friend of his.

Like to see this done for the Senators. Not that there is much positive to review there...