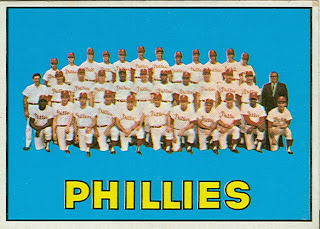 Please indulge me as I break from the usual format of this blog and present the cards from everyone on the 1967 Phillies team, with an assist from some 1965 and 1968 cards as needed.

Here are the Phillies #1 - #4 starters (in order). After 3 straight 19-win seasons, Jim Bunning won 17 in 1967 and was traded to the Pirates in the off-season. Chris Short won 20 games in 1966, but slipped to 9-11 in 1967 amid back problems. Larry Jackson was acquired from the Cubs in early 1966 for Fergie Jenkins, and had 15 wins in 1966, and 13 wins in 1967. Rick Wise began the season as a spot starter and long reliever, but soon out-performed Dick Ellsworth, and passed him in the rotation. Short is the only lefthander in this group.

Bob Buhl was the only holdover from the 1966 bullpen, as everyone else was either cut or traded. Ruben Gomez and Pedro Ramos were aging veterans acquired in the off-season to bolster the Phillies' revamped bullpen, but by the end of May, all three of these guys were gone, replaced by the newly-acquired Farrell and John Boozer, who was called up from the minors to fill the righthanded long relief role.

The Phillies platooned at catcher in 1967, but since Bob Uecker didn't hit much, lefthander Clay Dalrymple was the nominal #1 catcher. Ueck was traded to the Braves on June 6th for Gene Oliver, and thereafter Oliver saw much more playing time than Uecker had. Bill White was the Phillies' regular 1st baseman from 1966-68, but missed the first month or so of 1967 due to an off-season injury.

After several years as a utility player, Cookie Rojas finally won the regular 2nd base job from Tony Taylor. Taylor started the season filling in at 1B for the injured Bill White, and ended the season filling in at 3B for the injured Richie Allen. In between he also spelled Rojas at 2nd base. Taylor played as much as any regular. Good-field/no-hit Bobby Wine regained his regular SS job (which he lost to Dick Groat in 1966), but it would be his last season as a Phillies' regular. He missed most of '68 with injuries, and was sent to Montreal before the 1969 season. Allen was among the league leaders in HR and RBI. He started 121 of the first 122 games at 3B, but missed the last 40 games due to a serious hand injury. When he returned in 1968, it would be as the left fielder.

Here are the backup infielders. Rookie Gary Sutherland played exclusively at SS and LF in 1967. Phil Linz was the typical utility infielder/pinch-hitter, until he was traded on July 11th for Chuck Hiller (who filled the same role). Tito Francona was signed the day before the season started to help offset the early-season loss of Bill White. As part of their mid-June housecleaning, the Phillies sold him to the Braves.

As they did with the catchers, the Phillies platooned their left and center fielders in 1967. Lefty Tony Gonzalez started the season in a CF platoon with Don Lock, who was acquired from the Senators in the off-season. At the same time, lefty Johnny Briggs was platooning in left field with Gary Sutherland. On May 21st, Gonzalez and Briggs swapped positions, and by early August, Gonzalez would break free of the platoon and become an every-day player. He went on to bat .339, 2nd best in the league. Johnny Callison (the Phillies' #2 power hitter behind Allen) started 144 games in right field.

Doug Clemens spent the entire season with the Phillies as a lefthanded pinch-hitter and occasional outfield substitute. The other 3 guys here shared the same roster spot in 1967. Jackie Brandt began the season as a righthanded version of Doug Clemens. He was sold to the Astros on June 9th, and was replaced by Dick Groat, who had been on the disabled list since the 2nd week of the season with a leg injury. After making no starts following his return, Groat was sold to the Giants on June 22nd. Billy Cowan was then called up from triple-A to fill the righthanded PH/backup outfielder role for the rest of the season.

Dallas Green was added to the team after Buhl/Ramos/Gomez were sent packing, and although he technically occupied the 10th pitcher's spot on the roster, he saw little action that season (4 games between 6/14 and 6/30, and 4 games between 8/13 and 9/12). Rick Joseph was called up from triple-A San Diego in late August to provide corner infield backup after Richie Allen was lost for the season. He would stay with the team for the entire '68 and '69 seasons. Although Gary Wagner pitched for the Phillies during the '65 and '68 seasons (and part of '66), he only made 1 appearance in 1967, during someone's trip to the DL (Short?). Jimmie Schaffer was called up when rosters expanded in September and appeared in 2 games.

The "Little General" was the ringleader of this bunch. Callison and Allen were the Phillies' lefty/righty power source. Terry Fox was not on the team in 1967, but he had a card, so here it is. Long-time veteran Joey Jay was a non-roster invitee to spring training, but didn't make the team (but I needed a 4th card to pad out the row!)

And finally, the team picture (albeit from 1966) and the rookies' cards. Billy Wilson would not make the team until 1969. Ignore Don Shaw... he's only here because I can't find my scissors! :)

11/30/66 - Traded pitcher Darold Knowles to the Senators for Don Lock.

12/10/66 - Traded pitcher Joe Verbanic to the Yankees for Pedro Ramos.

Thanks for posting all these great cards and the 1967 recap.

Jim, your Suds card is in better shape than mine, which is all scuffed up.

I've been following your blog for a while and I like the Team Review to break the pace of the individual cards.

Some of the things you're doing in your blogs have given me some ideas for my blog.