After the 1963 season, Bond was sold to the Houston Colt .45s. Not only did this get him back to the major leagues, but he became an everyday player in Houston in 1964, starting 76 games at 1st base and 70 games in the outfield.

Walt's playing time decreased slightly in 1965. Where he had been the clear #1 first baseman the previous season, now he split the position evenly with Jim Gentile. Bond started 68 games at 1st base, but got only 36 starts in the outfield this season, as the newly-acquired Lee Maye got most of the playing time in left field. 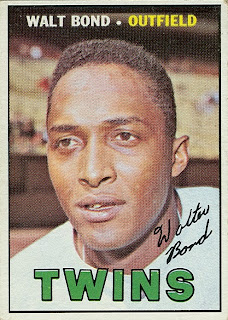 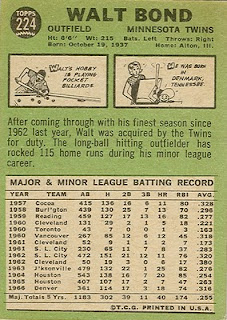 Two days before the start of the 1966 season, Bond was traded to the Twins for Ken Retzer, a 30-ish minor-league catcher who played for the Senators from 1961-64. Walt spent the entire 1966 season at triple-A Denver, since the the big club's outfield was well-stocked with Tony Oliva, Jimmie Hall, Bob Allison, Ted Uhlaender, Andy Kosco, and Sandy Valdespino, as well as frequent outfield starts by infielders Harmon Killebrew and Cesar Tovar.

Walt began the 1967 season with the Twins, but his leukemia (which had been in remission) returned. He played only 10 games (his last on May 7th) before he was released in mid-May. He played briefly with the Mets' AAA team, but his illness had caught up to him.

More information here, here, and here.
Posted by Jim from Downingtown at 11:41 PM