Here is the final card for Terry Fox (#181). Of the 27 players pictured on Phillies' cards in 1967 (not counting rookie cards), Fox is the only one who did not play for the Phillies that season.

I can remember that my first 1967 Terry Fox card was a beat pup, with 4 badly-rounded corners (and maybe some creases, but not as creased as my first 1967 Bill White card). Some years ago I upgraded to this card, and although you could put an eye out with these corners, the card is badly off-center vertically.

Terry began pitching in 1954 with the unaffiliated class-C New Iberia (La) Pelicans. After 2 seasons there, the Braves picked him up and he eventually made his major-league debut with the Braves on September 4, 1960. After the season, he was part of a 6-player trade with the Tigers. 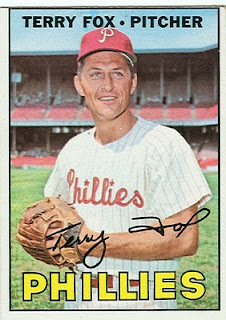 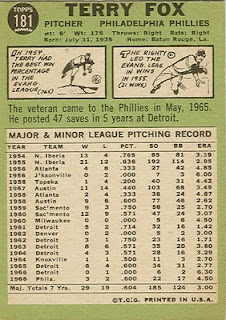 With the Phillies for most of 1966, Terry (along with Ray Herbert and Roger Craig) provided veteran bullpen support for rookie closer Darold Knowles.

His final major-league game was on September 25, 1966. Fox spent the 1967 season with Philadelphia's triple-A team in San Diego. He probably didn't feel out of place, because that team had a large collection of ex-major-leaguers, including Ed Roebuck, Dick Stigman, John Tsitouris, Dick Bertell, Jimmie Schaffer, Jim Gentile, Marty Keough, and Lou Clinton!
Posted by Jim from Downingtown at 11:26 PM