There are 33 uniformed men in the picture. Manager Gene Mauch is front and center in the first row, and I assume he is flanked by two coaches on each side, which leaves 28 players pictured. In the first row, Johnny Callison appears to be on the far right, with Richie Allen next to him. 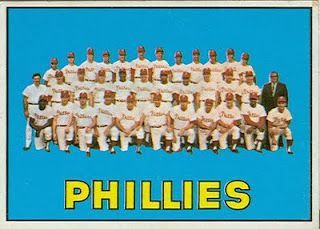 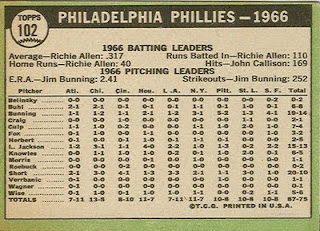 The back of the team cards always include team statistics from the previous season. Each pitcher with a decision is listed, with their record per opponent.

We can see that Jim Bunning, Chris Short, and Larry Jackson were the top 3 starting pitchers. Bob Buhl, Rick Wise, and Ray Culp all performed both as starters and relievers. Rookie Darold Knowles, (acquired from the Orioles before the season) was the top relief pitcher, appearing in 69 games and collecting 13 saves. All the other listed pitchers were bullpenners, mostly with ERAs over 5.00. John Boozer, Fergie Jenkins, Steve Ridzik, and Grant Jackson all appeared in less than 3 games each, and had no record.

In 1967, Bunning, Short, Wise, and Larry Jackson returned as starting pitchers, but the remaining staff was swept clean. Culp was traded to the Cubs for starting pitcher Dick Ellsworth, bullpen ace Knowles went to the Senators for outfielder Don Lock, Joe Verbanic was sent to the Yankees for reliever Pedro Ramos, John Morris was traded to the Orioles for reliever Dick Hall. Bo Belinsky was lost to Houston in the rule 5 draft. Roger Craig, Ray Herbert, Ed Roebuck, and Terry Fox were released during or after the 1966 season, and Gary Wagner spent the 1967 season in triple-A.

Only Bob Buhl survived the off-season purge, and he got his walking papers before the end of May.
Posted by Jim from Downingtown at 4:00 PM