Gary Peters was the ace of the White Sox pitching staff in the mid-to-late 1960s.

In 1963 he joined the White Sox for good as a 26-year-old rookie, and what a rookie season it was! He compiled a 19-8 record, his 2.33 ERA led the league, and he led all White Sox starters (Ray Herbert, Juan Pizarro, John Buzhardt, Joe Horlen) in games and innings pitched. He was also named American League Rookie of the Year.

Peters followed that up with another fine season in 1964. He led the starting rotation (same 5 guys) in wins (20), games, starts, complete games, and innings pitched, and was named to the all-star team. 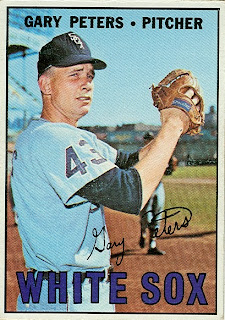 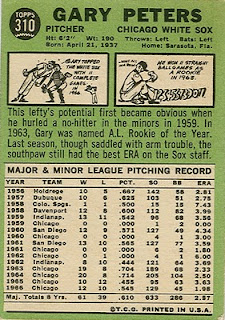 1965 was an off-year for Gary, but 22-year-old Tommy John had now joined the rotation (replacing the aging Ray Herbert), and went 14-7 to help pick up the slack. Peters rebounded in 1966, and although his 12-10 record is not spectacular, his 1.98 ERA was tops in the American League.

In 1967, Peters was back on top in the "workhorse" categories of games, starts, and innings pitched, but his 16-11 record was eclipsed by Horlen's 19-7. The Sox' top 3 of Peters, Horlen, and John were as good as any in the league.

Look out! In 1968 Gary's record came crashing down to 4-13. He was even used in relief for 6 games. Peters would play one more season in Chicago before being traded to the Red Sox (along with catcher Don Pavletich) for utility infielder Syd O'Brien, and a minor-league pitcher. What a humbling end to a great run in Chicago!

Peters' first 2 seasons in Boston went well, as he pitched in 34 games each season, and compiled records of 16-11 and 14-11. However, in his final season (1972) he was shifted to the bullpen, making 29 of his 33 appearances as a reliever. He finished with a 3-3 record, and was released after the season, ending his 14-year career.
Posted by Jim from Downingtown at 11:27 PM