Jack Kralick (#316) is one of those players you don't really give a second thought to. By 1967 he was a borderline pitcher, he played in the American League (which most young Phillies' fans could probably care less about), AND he played for the Indians (which in 1967, most baseball fans outside of Cleveland could care less about).

Kralick played in the White Sox' farm system from 1955 until he was released in June 1958. After the 1958 season, he was signed by the (old) Washington Senators. Jack spent most of the 1959 season at double-A Chattanooga, but appeared in 6 games for the Senators.

1960 was his first full season in the majors, and he was the #4 starter (in starts and innings pitched) behind Pedro Ramos, Camilo Pascual, and Don Lee. In 1961 the team moved to Minnesota, and Kralick moved up a notch, behind Ramos and Pascual. 1962 was more of the same for Kralick, but with 2nd-year man Jim Kaat leading the rotation (in place of Ramos). 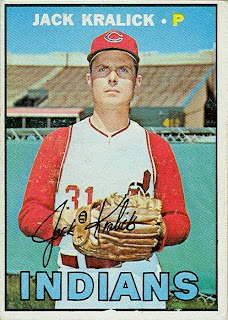 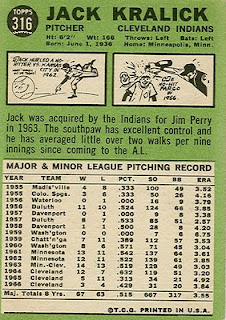 In May 1963, Kralick was traded to the Indians for pitcher Jim Perry (as the Twins began their quest to corner the market on pitchers named Jim).

Jack led the Indians in wins in 1963 and 1964, but after that he faded into relative obscurity as Cleveland's rotation was taken over by Sam McDowell, Luis Tiant, Sonny Siebert, and Steve Hargan.

On May 1, 1967, he was purchased by the Mets. This seems like a dubious move by the Mets, since Kralick's final major league game was on April 23rd, and he has no minor league record during or after 1967.

Here's a funny news item I found a few months ago about the Mets' acquisition of Kralick.
Posted by Jim from Downingtown at 9:33 PM

Any idea where this picture was taken?

has several with the same stadium in the background, and someone commented that it could be their home park.