Ruben Gomez (#427) was a starting pitcher for the New Your Giants during the 1950s, and later had 2 tours of duty with the Phillies. Gomez had a Topps card every year from 1954 to 1961, then not again until this final card in 1967. Somehow, he got this late-series card on the strength of being on the Phillies roster for a few weeks in April.

After playing for several seasons in Canada, Gomez was signed by the (old) Washington Senators in 1950 and assigned to their Havana, Cuba minor-league team. In mid-1951, he was returned to his previous team.

After the 1951 season, he was drafted from his Canadian team (this time by the Yankees) and assigned to their Kansas City farm team. In mid-1952 he was released.

Finally the yo-yo stopped. Gomez was signed by the New York Giants in January 1953 and spent 6 seasons as one of their starting pitchers. In 1954 he won 17 games. 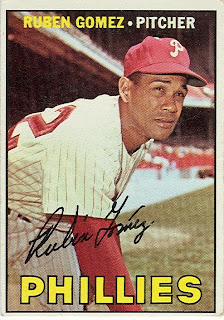 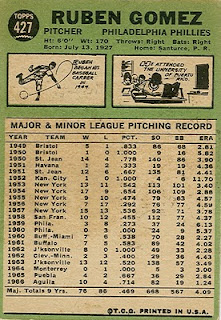 After the 1958 season, San Francisco traded him to the Phillies for pitcher Jack Sanford. After Gomez left the Phillies, his career crashed and burned. What happened? Maybe he was injured, or maybe it was just being on a bad team.

In 1962 he was traded to the Indians, and then to the Twins. When Minnesota released him before the 1963 season, he was quickly re-signed by the Indians, but spent the entire season in the minors.

Before the 1964 season, the Indians shipped him to the Mexican League, where he played for the next 4 seasons, except for a brief stint with the Phillies in April 1967.
Posted by Jim from Downingtown at 10:34 PM

I didn't even know who Gomez was until I got this 5th-series card (probably in July 1967), because by the time I jumped on the MLB bandwagon in late-May 1967, he was already off the team.

I wonder if this photo was from his 1st stint with the Phillies (1959-60), because he only pitched 11 innings for them in 1967. (Baseball-Almanac.com says he wore #22 during both stays with the Phillies.)