Frank Howard was signed by the newly-relocated Los Angeles Dodgers in 1958. He spent the better part of 1958 and 1959 in the minors, although appearing in a handful of games for the Dodgers in both seasons.

In 1960, Howard began the season at triple-A Spokane, but was soon recalled to the Dodgers. He made his first start on May 13th, and by the end of the season, he had started 91 games in right, 21 games in left, and won the 1960 NL Rookie of the Year award. 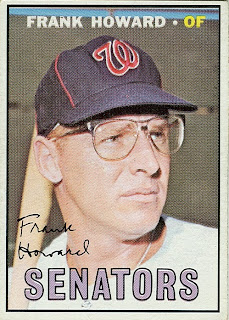 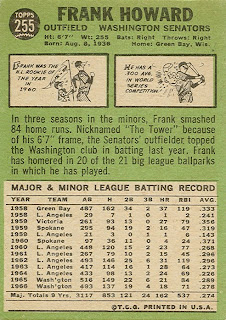 After the 1964 season, Howard was traded to the Senators along with pitchers Phil Ortega and Pete Richert, first baseman Dick Nen, and third baseman Ken McMullen for pitcher Claude Osteen and infielder John Kennedy. Although primarily a rightfielder with the Dodgers, Howard would be Washington's regular leftfielder from 1965 to 1971 (although from 1968-71, he would play first base about 25% of the time).

In 1972, Howard's playing time diminished, and in late August he was sold to the Tigers, where he finished his career in 1973.

The back of this card notes that his nickname was "The Tower". I have never heard this, but am more familiar with his other nicknames: "Hondo", and the more menacing "Capital Punisher". Howard's late-1960s home run spree, coupled with his size (6'-7" and 255 pounds) made that a perfect nickname.
Posted by Jim from Downingtown at 9:19 PM

2 things I remember about Frank Howard:

My first big league game was a Senators Red Sox game at Fenway on a warm Friday night in June or July of 1971. Our entire Little League took it upon themselves to boo Capital Punishment every chance we got, and congratulated each other on keeping him in the park that night.

About 20 years later I met Frank during a promotional tour for some brand of liquor at a bar. He was (and still is,) an enormous man, but also a true gentleman.