This is the final card for George Altman (#87). 1967 was also his last season, most of which was spent in triple-A.

After playing the 1955 season with the Kansas City Monarchs of the Negro Leagues, George was signed by the Cubs in '55, and played all of 1956 and part of 1958 in the Cubs' farm system. Sandwiched between those 2 seasons was a year and a half in the military.

Altman made his major-league debut with the Cubs on April 11, 1959, and was the Cubs' regular center fielder during his rookie season. 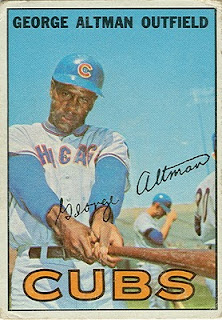 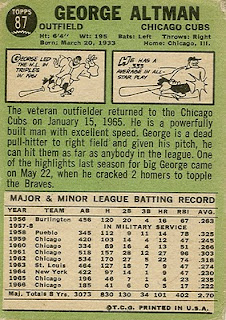 In 1960, he was replaced by Richie Ashburn, and was used as a backup outfielder. George was back in the starting lineup the next year, as he took over the right field job in 1961 and 1962. In 1962 his outfield mates were Billy Williams (LF) and Lou Brock (CF).

After the 1962 season, Altman and pitcher Don Cardwell were traded to the Cardinals for pitchers Larry Jackson and Lindy McDaniel, and catcher Jimmie Schaffer. He was the Cardinals' regular right fielder in 1963, playing alongside Stan Musial and Curt Flood. (Wow, in 2 years, Altman played alongside 4 all-stars!)

Altman only lasted 1 season in St. Louis, and was traded to the Mets for pitcher Roger Craig. George was the Mets' regular left fielder in 1964, since their #1 outfielder (Joe Christopher) played in right.

Once again, Altman's stay lasted only 1 season. He was traded to the Cubs for outfielder Billy Cowan in January 1965.

George's 2nd tour with the Cubs was not as productive. In 1965 he was in the Cubs' 5-man committee of left fielders. In 1966 he backed up rookie sensation Byron Browne in left field. In 1967 he played 4 games for Chicago and 108 games for triple-A Tacoma.
Posted by Jim from Downingtown at 10:03 PM