In his final six years, Hal Woodeshick (#324) went from expansion-team draftee (twice) to pitching in the World Series.

Woodeshick was signed by the Phillies prior to the 1950 season, and played one year of minor-league ball for them. After the season, he was traded to an unaffiliated minor-league team. A year later he was acquired by the New York Giants organization.

After 1 year with a Giants' farm team, the 1953 and 1954 seasons are unaccounted for in his Baseball-Reference.com record. Was he injured? Was he in the military? Usually, Baseball-Reference.com will document military service, but not missing seasons due to injury. Woodeshick's Wikipedia page says he was in the military. In any case, he returned to the Giants' farm system in 1955. 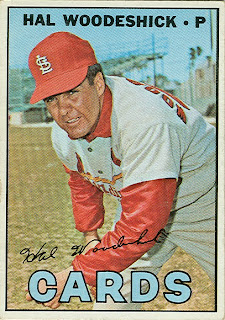 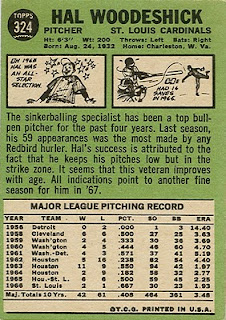 After the 1955 season, Hal was drafted by the Tigers, and spent most of 1956 and all of 1957 in the Tigers' farm system. He appeared in 2 games for Detroit in September 1956. Hal was acquired by the Indians in 1958, and divided his time between the majors and triple-A.

Following the 1960 season, the Senators moved to Minnesota, but unfortunately for Hal, he did not, as the expansion Senators selected him off the Twins' roster. His punishment would be short-lived, as he was traded to the Tigers in June for infielder Chuck Cottier.

Just as Woodeshick was counting his blessings for having escaped from an expansion team, the upstart Houston Colt .45s purchased him from the Tigers after the 1961 season!

1965 was a different story altogether. After appearing in 27 games (32 innings), he was traded to the Cardinals on June 15th for pitchers Mike Cuellar and Ron Taylor. (This seems like a win-win. The Astros get Mike Cuellar, and Woodeshick not only escapes Houston, he goes to one of the top NL teams.)

Woodeshick took over the closer's role with the Cardinals, appearing in 51 games while collecting 15 saves in the 2nd half of 1965. The following season, the emergence of Joe Hoerner and Nelson Briles pushed Woodeshick down 2 slots in the bullpen.

With the addition of Ron Willis and Jack Lamabe, Woodeshick only pitched 36 innings in 1967, with his final appearance coming on September 4th. He pitched 1 inning in game 6 of the World Series.
Posted by Jim from Downingtown at 10:24 PM

He retired on a high note -- he got a ring. I wonder how many players played their last career game in the World Series for a World Championship club.

One is Eddie Mathews for the 1968 Tigers.