Each year in the last series, Topps included some "AL Rookies" and "NL Rookies" cards, where players (not on the same team) were pictured. My assumption has always been that Topps waited until after the season started, then used these cards as a "catch-all" for some previously un-documented rookies.

First, we have the lone AL Rookies card, featuring Rod Carew and Hank Allen. Topps hit a homerun here, as these 2 players appeared in more games in 1967 than any other rookie not already appearing on a card. 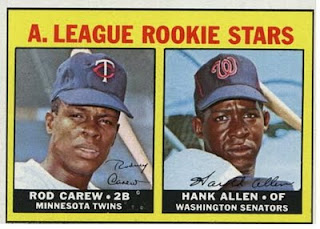 Card #576 features Ramon Hernandez and Norm Gigon. After 8 years in the minors, Gigon appears to have parlayed a 3-run homer in his major-league debut into a late-season rookie card. 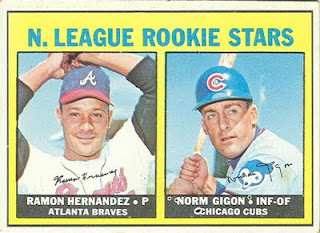 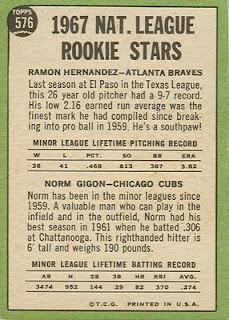 Card #587 features Don Shaw and Gary Sutherland. Sutherland was the backup SS/LF for the Phillies in 1967, and saw action in a lot of games. The following season, he faded into a utility/pinch-hitting role, and was claimed by the Expos in the expansion draft following the 1968 season. 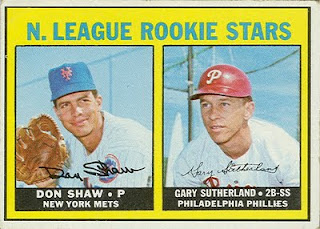 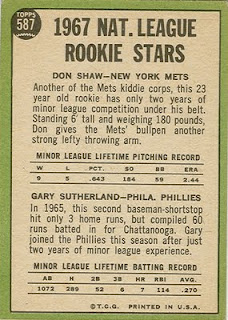 Card #592 features Jim Shellenback and Ron Willis. Willis was a useful addition to the Cardinals' bullpen on their way to winning the 1967 World Series. 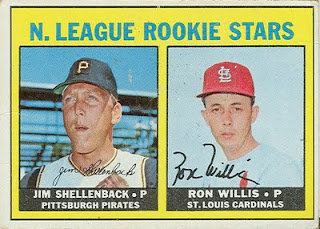 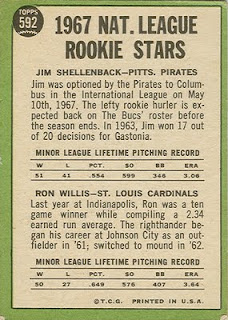 OK, now let's consult the chart below to see how well Topps speculated on these rookies. (Click on image to enlarge) 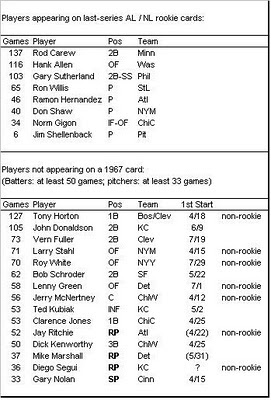 They were right-on with the AL Rookies card. For the NL Rookies, 4 of the 6 players had impressive rookie seasons. However, there seems to be better choices than Norm Gigon and Jim Shellenback, most notably Gary Nolan, John Donaldson, Vern Fuller, and Bob Schroder. (Gary Nolan finished 1967 as 4th in ERA and 4th in strikeouts.)
Posted by Jim from Downingtown at 1:34 AM