Johnny Podres is probably best known for winning 2 games in the 1955 World Series, (including the deciding game 7) to give Brooklyn its only World Series championship.

After 3 seasons in the Dodgers farm system (including 1 with the triple-A Montreal Royals), Podres joined the Brooklyn Dodgers at the start of the 1953 season. At age 20, he was the #5 starter on a staff led by Carl Erskine.

After helping the Dodgers to the World Series championship over the Yankees in 1955, "Pods" missed the 1956 season due to military service. He returned in 1957, and led the league in ERA and shutouts (7). He never won 20 games, but in 1961 his .783 winning percentage was tops in the NL. 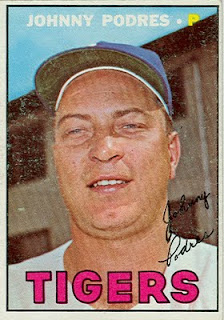 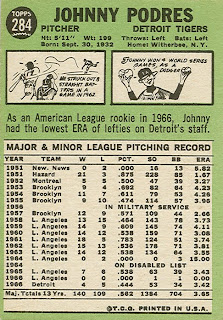 Podres never rose above being the #3 starter (first behind Erskine and Don Newcombe, then after returning from the service, behind Sandy Koufax and Don Drysdale).

Johnny missed most of the 1964 season, making only 2 starts (both losses). [I've never seen another card indicating that a player was on the disabled list for part of the season.] Podres returned in 1965 as the #4 starter, but pitched far fewer innings than Koufax, Drysdale, and Claude Osteen.

The comment on the back of this card mentions Podres having the lowest ERA among Tigers lefties in 1966. Unfortunately, in 1967 his ERA was higher than 10 other Tigers' pitchers. He was released following the season.

Normally, this would have been the end of Johnny's career, but after being retired for 1968, the expansion Padres signed Podres, and he pitched for one more season.

Johnny went on to be a pitching coach, winding up as the Phillies' pitching coach during Jim Fregosi's managerial tenure (including 1993). Then due to failing health, he cut back to being a part-time minor-league instructor.
Posted by Jim from Downingtown at 8:58 PM

Podres pitched for the Padres. That's too good.