This is Joe Adcock's first and last manager card (#563). Joe retired as a player at the end of 1966, and was immediately hired to be the Indians' manager, without any previous major or minor league coaching or managerial experience. (!?!) He finished the season with the Indians, but was replaced for 1968 by Al Dark, fresh off Dark's firing by the Athletics the previous August.

I'm posting Joe's manager card here because his last card as a player was in 1963, even though he was the Angels' regular first baseman from 1964 to 1966. It's a mystery why he didn't have a card for those years. (None of the usual reasons, like diminished playing time, an extended trip to the minors, or a late-season release apply in this case.) While browsing the internet yesterday for possible reasons, I found none, but also learned that Orioles' pitcher Dick Hall didn't have a card from 1964 to 1966 either. If anyone knows why these players didn't have a card, please comment below. 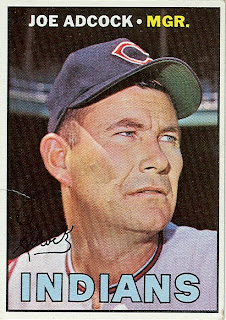 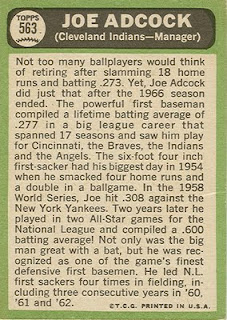 You can view his stats here: minor-league major-league

Joe began his pro career in 1947 in the Reds system. After 3 seasons, he made the Reds team in 1950, and played for 3 seasons in Cincinnati, primarily as an outfielder.

Prior to the 1953 season, Adcock was traded to the Milwaukee Braves in a 4-team deal that also included the Phillies and the Brooklyn Dodgers. Once with the Braves, he switched to first base, staying there for the rest of his career. Joe hit 35 or more homers twice while with the Braves. He also played in 2 World Series with the Braves, both times against the Yankees (winning in '57, losing in '58).

Following the 1962 season, Joe was traded to the Indians. He only played one season in Cleveland, as after the season he was sent to the Angels for slugging outfielder Leon Wagner. Adcock was the team's full-time first baseman for his first 2 seasons with the Angels, and shared the position with Norm Siebern in 1966. He was released after the season, ending a 17-year playing career.

After managing the Indians in 1967, he managed the Angels' triple-A team in Seattle for the 1968 season.
Posted by Jim from Downingtown at 9:28 PM

I wonder if Adcock never signed a contract with Topps, thus the missing cards?