This is the final baseball card for long-time Yankee Bill "Moose" Skowron (#357).

Moose began in the Yankees farm system in 1951, and advanced to Kansas City in 1952. (This is when Kansas City was officially the Yankees' triple-A farm team, as opposed to the mid-to-late 1950s, when the Yankees seemed to use the Athletics club as a feeder team!)

Anyhoo, Skowron made the Yankees in April 1954, and spent the next 9 years as their regular first baseman. This coincided with 7 World Series trips, with the Yankees winning 4 times. (Skowron just missed the string of 6-for-6 World Series championships from 1947 to 1953!) Each year from 1960-1962, Moose was the Yankees #3 homerun threat behind big boppers Mickey Mantle and Roger Maris. 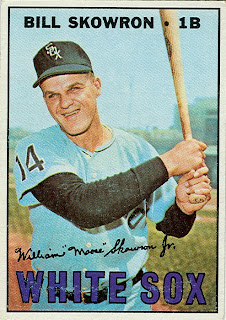 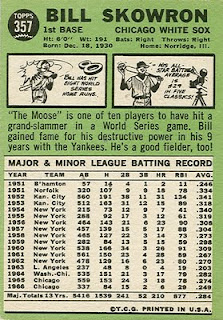 After the 1962 season, the Yankees needed to find playing time for young first baseman Joe Pepitone, so while still at the top of his game, Skowron was traded to the Dodgers for pitcher Stan Williams in the off-season. After only 1 season in LA (playing behind the younger Ron Fairly), Moose was purchased by the Senators in 1964, but his time there was short, as he was traded to the White Sox in mid-season for first baseman Joe Cunningham.

Once in Chicago, Moose became a fixture at first base, starting 70 games in 1964 (after the mid-July trade), and 140 games in 1965. In 1966, he shared the position with Tom McCraw. McCraw took over at first base in 1967, which relegated Skowron to 8 pinch-hitting appearances, until Moose was traded to the Angels on May 6th.

Skowron finished out the 1967 season in California, playing in 62 games (half as a pinch-hitter, and half at first base (giving regular Don Mincher a rest). He retired at age 36, ending his 14-year career.
Posted by Jim from Downingtown at 7:56 PM

This was the first '67 card I ever owned.