Here is Ken Holtzman’s rookie card. Holtzman was signed by the Cubs in 1965, and although he compiled a record of 8-3 in his only minor-league season, and made his debut with the Cubs (3 games) in September 1965, Topps saw fit to exclude him from all the Cubs Rookie Stars cards in the 1966 set, preferring instead to allocate one of those cards to John Boccabella and Dave Dowling (?!?!?)

Ken pitched the entire 1966 season for the Cubs, leading the staff in strikeouts (171), with a record of 11-16 as the Cubs’ #2 starter behind veteran Dick Ellsworth (whose record was 8-22, and would be traded to the Phillies in the off-season). 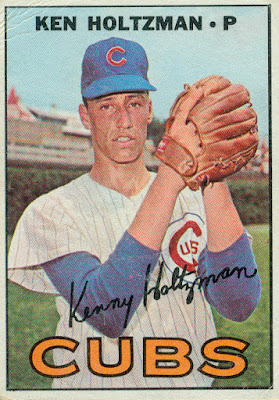 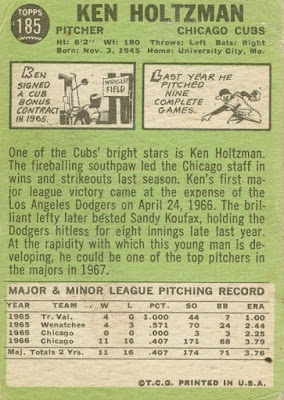 Holtzman missed much of the 1967 season while in the National Guard, but he compiled an excellent 9-0 record in 12 starts.

After a sub-par season in 1971 (9-15), Ken asked for a trade and was sent to the Athletics before the 1972 season for outfielder Rick Monday. Holtzman had great success in his 4 seasons with Oakland, winning 19, 21, 19, and 18 games per season. He made his only All-star teams in ’72 and ’73, and pitched in the ALCS each of those 4 years, and in the World Series for the first 3 seasons (with the A’s winning all 3 times). That was to be his only post-season action for his career.

One week before the start of the 1976 season, Ken and Reggie Jackson were traded to the Orioles for outfielder Don Baylor and pitchers Mike Torrez and Paul Mitchell. Ken’s stay in Charm City would be short, as he was sent on to the Yankees in June (with catcher Elrod Hendricks and pitchers Doyle Alexander and Grant Jackson) for catcher Rick Dempsey and pitchers Scott McGregor, Tippy Martinez, Rudy May and Dave Pagan.

Holtzman was a non-factor in the Yankees' starting rotation during his time there, and although the Yanks were in the post-season in ’76 and ’77, Holtzman did not play.