I'm wrapping up this 3-post Opening Day exercise with a look at the American League opening day starters in 1967. The teams are shown in order of their 1967 finish.

The only "Hey!  Where's so-and-so?" moments here are the absence of Tigers' left fielder Willie Horton, and the Athletics' rookie center field phenom Rick Monday. Rick started 105 games in center as a rookie, but none until game #10. 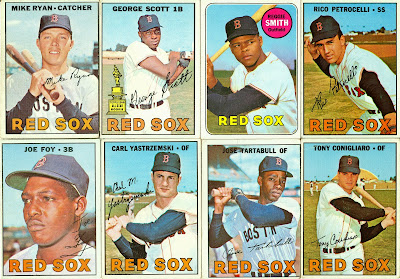 Except for Jose Tartabull, the other seven were the AL champs' regular position players.  Rookie Reggie Smith started the first 6 games at 2nd base before moving out to center field. 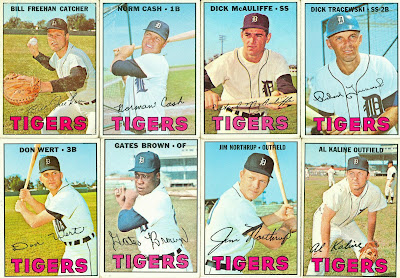 With last year's shortstop Dick McAuliffe moving over to play 2nd base, the Tigers had their choice of 2 weak-hitting shortstops (Dick Tracewski, Ray Oyler), and gave the opening day nod to the Weasel. Also, Gates Brown was the opening day left fielder?  Where's Willie Horton?  If not him, then where's Mickey Stanley? 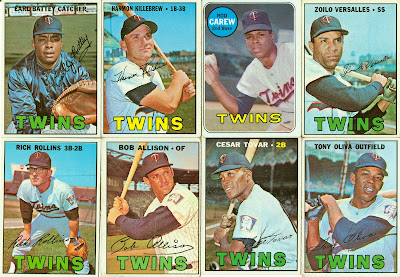 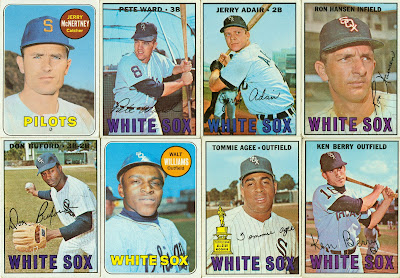 The big surprise here is that 3rd-string catcher Jerry McNertney got the opening-day nod.  I would have thought rookie Duane Josephson was behind the dish. 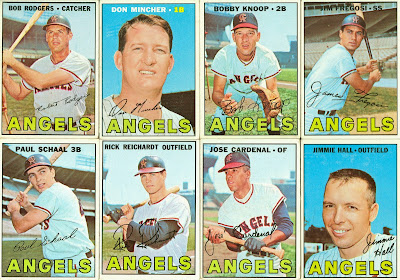 The Angels' opening-day lineup included the newly-acquired Don Mincher and Jimmie Hall, both coming from Minnesota in exchange for pitcher Dean Chance.  Rick Reichart was a fixture in left field, and Jose Cardenal and Hall were the best of the SEVEN other outfielders on the Angels' roster. 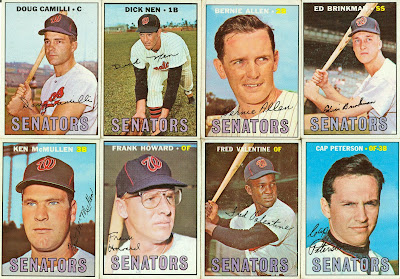 Doug Camilli was the opening-day catcher?  Where was Paul Casanova? Frank Howard is listed as 6'-7" and 255 lb.  That must have been a scary sight watching him lumbering around in left field! 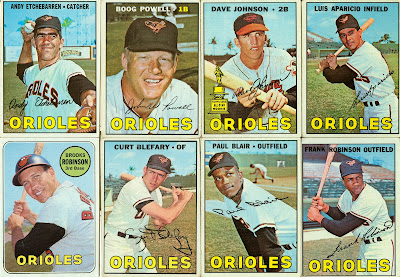 This opening-day starting 8 remained intact from the 1966 World Series champions. 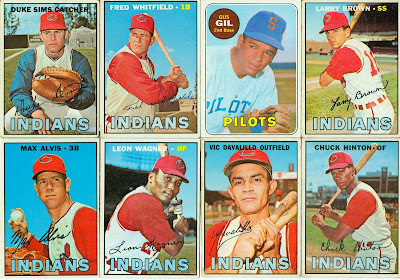 This is pretty much the lineup I would have expected.  The Indians didn't have a viable 2nd baseman for the first half of the season, so Gus Gil was no worse than the other available options. 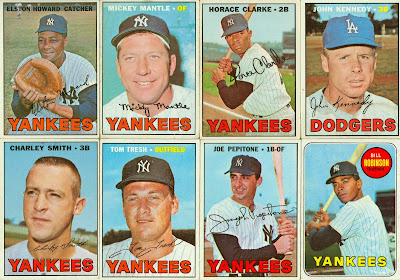 The Yankees lineup is as I would have expected, except at shortstop.  John Kennedy was acquired from the Dodgers one week before the season opener, and started the first 24 games at short, before Ruben Amaro took over for the remainder of the season.  Due to his limited mobility, Mickey Mantle swapped positions with Joe Pepitone in '67 and '68. 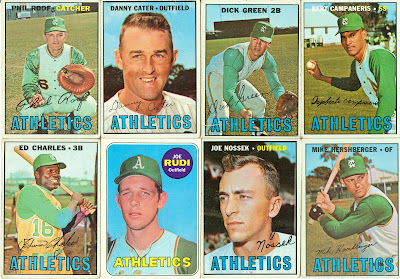 The big surprise here is in left and center fields.  I thought Joe Rudi wasn't due for another year? Also, first-ever #1 overall draft pick (in 1965) Rick Monday rode the bench for the first 8 games.  After 2 starts in left field, he assumed the center field job on April 23rd.


Posted by Jim from Downingtown at 8:00 AM