It's hard to believe I haven't gotten around to Willie McCovey yet on any of my blogs. Plus, the Giants are under-represented here, so I'm killing 2 birds with one stone.

Willie "Stretch" McCovey was a fan favorite in San Francisco (even more so, I've heard, than the transplanted New Yorker - Willie Mays). Back in the 60s and 70s, I heard more than a few pitchers say that McCovey was the most feared hitter they ever faced.

Willie was signed by the New York Giants in 1955, and after 4 1/2 seasons in the minors he made his big-league debut in late-July 1959. He started 49 of the final 55 games at 1st base (pushing Orlando Cepeda to left field) and won the NL Rookie of the Year award that season. 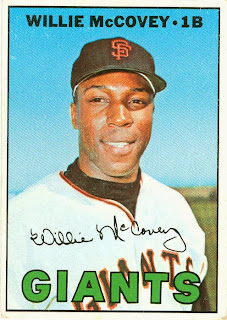 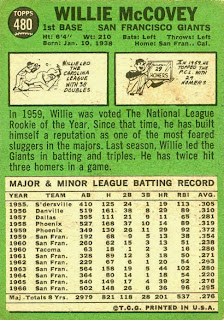 In 1960 McCovey picked up where he left off, but by early June he found himself riding the bench most of the time, and even spent the 2nd half of July back in the minors.

During the '61 and '62 seasons, Willie was used as a pinch-hitter and part time fielder. He shared the 1st base job evenly with Cepeda in 1961 (playing there when Orlando was in left field), then in '62 Willie's primary position was left field, where he started 42 games to Harvey Kuenn's 82 games. He was also 3-for-15 in the 1962 World Series, with a triple and a home run.

McCovey became an everyday player beginning in 1963. Playing in 152 games (including 130 starts in left and only 14 at first base), Willie led the NL with 44 home runs (the first of 3 times he would do so) and made his first all-star team.

Willie took over as the Giants' everyday 1st baseman at the start of the 1965 season. Injuries relegated Cepeda to 34 at-bats over 33 games that year, so McCovey started all but 12 games at 1st base. The following season, Cepeda was traded to the Cardinals in early May, so Willie had a permanent home in the infield.

Willie remained with the Giants through the 1973 season, then was traded to the Padres. After the better part of 3 seasons in San Diego, he was sold to the Athletics in August 1976, where he finished out the season.

In November 1976 he was granted free agency, and returned to the Giants. Willie was the team's primary (not everyday) first baseman for the next 3 seasons.

He was inducted into the Hall of Fame in 1986.
Posted by Jim from Downingtown at 8:44 PM

Classic '67 card! I saw Stretch hit a home run against the Cubs at Wrigley when I was a kid. I think it won the game for the Giants.