Tommie Reynolds was a journeyman outfielder for the Athletics, Mets, and others from 1963-72. Check out the huge gap between his first and last names. I think Topps planned to print "TOMMIE" (like they did on the card back) but changed their mind at the last minute.

Reynolds was signed by the Kansas City Athletics in 1963, and made his major-league debut with 8 games that September. Tommie started the 1964 season with the A’s, but by early-May found himself back in the minors until a September call-up. 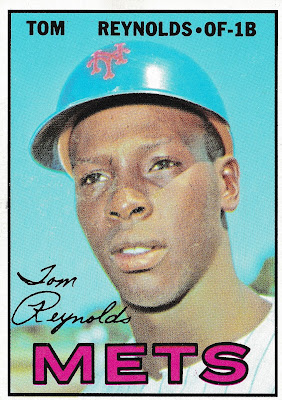 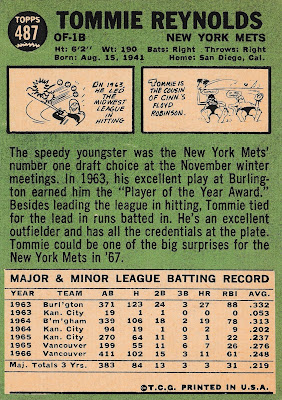 In 1965 he was with the team for most of the season (except for May and June) . He was the team’s #3 outfielder (behind Mike Hershberger and Jim Landis), starting 72 games in left field and another 7 games in right. Upon his return from the minors, Tommie started 68 of the final 92 games in left field.

With all that playing time during the 2nd half, it’s puzzling why he spent all of 1966 in the minors. Maybe it was his .237 batting average? Maybe his 1 home run? In any case, he was stuck in triple-A all year, until the Mets picked him up in the Rule 5 draft after the season.

Almost 2 years from the date of his acquisition by the Mets, the Athletics “Rule-Fived” him again. He was back with the A’s (this time in Oakland) and in 1969 received the most playing time of his career (107 games, 315 at bats). He almost duplicated his playing time from the 1965 A’s, starting 71 games in left and 6 in right as the team’s #3 outfielder.

He was one-and-done in Oakland though. The Angels acquired him in May 1970 and he played parts of the next 2 seasons with California.

Reynolds was a coach for the Athletics and Cardinals from 1989-96.
Posted by Jim from Downingtown at 7:00:00 AM