Ed Brinkman was a light-hitting shortstop for the Senators in the 1960s and Tigers in the early-1970s. Together with Tigers’ shortstop Ray Oyler, they set the lowest of bars for hitting prowess, in the days before Mario Mendoza established the “Mendoza Line”.  (Fittingly, Brinkman eventually replaced Oyler in Detroit.)

Brinkman was signed by the Senators in 1961, and made his major-league debut with 4 games in September of that year. After splitting the 1962 season between the Senators and their class-B team, he made the big club at the start of the 1963 season. 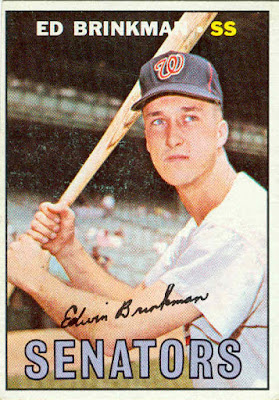 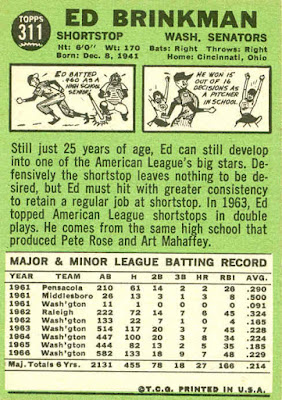 Well, he came from the same high school as Pete Rose, so he's got THAT going for him!


Notice the spike in his batting average in 1969 and 1970? Those are the 2 seasons when Teddy Ballgame was his manager. After he moved on to the Tigers in 1971, he reverted to his old batting ways. 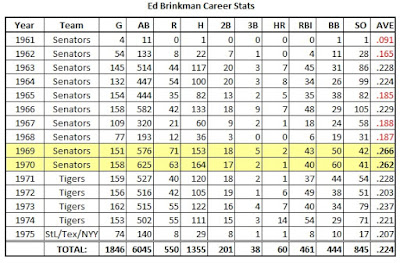 Always a good glove man, he won a Gold Glove award in 1972 and surprisingly, made the All-Star team in 1973.

After the 1974 season, Ed was one of 3 players traded to the Padres for 1st baseman Nate Colbert. On the same day, San Diego flipped him to the Cardinals for pitchers Sonny Siebert, Alan Foster, and Rich Folkers. (What a haul!)

In June 1975 he moved on to the Rangers in exchange for outfielder Willie Davis, then was purchased by the Yankees a week later. The Yankees released him the following Spring.

After his playing career, Brinkman was a minor-league manager for the Tigers, and later a coach and scout for the White Sox.

His brother Chuck Brinkman was a catcher for the White Sox in the early-1970s.
Posted by Jim from Downingtown at 12:57:00 AM