Here is a review of the 1967 Senators squad, as requested by "Spiff" of the Texas Rangers Cards blog back in May. 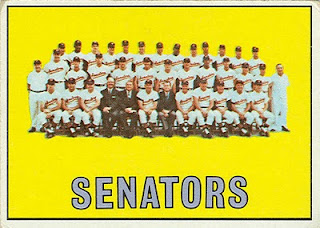 After two straight 8th-place finishes, the Senators finished in 6th place in 1967. After the season, manager Gil Hodges was hired away by the New York Mets, and the Senators plummeted to the American League basement in 1968. In 1967, the Senators' lone all-star representative was catcher Paul Casanova, who had a better year in 1966 than he did in 1967.

These were the top 4 starting pitchers (in order of starts and innings pitched). Phil Ortega was far and away the workhorse of the staff in 1967, appearing in 34 games (all starts) and pitching 219 innings (55 more innings than Camilo Pascual). His record was 10-10. Pascual, acquired from the Twins in the off-season, compiled a 12-10 record in 7 fewer starts. Barry Moore had a bad season, compiling a 7-11 record and walking just as many as he struck out. 20-year-old rookie Joe Coleman Jr was the 4th starter.

Pete Richert was one of the Senators top 3 starters in 1966, but after making 10 starts in 1967, he was traded to the Orioles for 1st baseman Mike Epstein and pitcher Frank Bertaina. Bertaina manned the #5 spot in the rotation, making 18 starts. Darold Knowles was acquired in the off-season from the Phillies, where he was their bullpen ace in his rookie year. He filled the same role for the Senators in 1967, leading the team with 61 appearances and 14 saves. Bob Humphreys was the long man in the bullpen, pitching 105 innings in 48 games, while compiling a 6-2 record.

Other members of the Nats' bullpen in 1967 included Dick Lines, Casey Cox, and rookie Dave Baldwin, all of whom were used only in relief. Bob Priddy was acquired from the Giants in December 1966 (along with outfielder Cap Peterson) for pitcher Mike McCormick. Priddy started 8 games along with his 38 relief appearances.

Dick Bosman, Jim Hannan, and Buster Narum each pitched in fewer than 10 games for the Senators, and spent most of the year as starters with the AAA club in Hawaii. Mike McCormick's 1st series card shows him as a Senator, but he was traded to the Giants in December 1966. He went on to lead the National League with 22 wins in 1967!

Here are the Senators' regulars for 1967. Paul Casanova, who took over the team's catching duties as a rookie in 1966, continued in that role in 1967, and made the All-Star team. Mike Epstein, who hit 30 homers in class A in 1965 and 29 homers in AAA during 1966 was blocked by Boog Powell in Baltimore, so during spring training he demanded the Orioles to trade him. He was finally accommodated in late May. Bernie Allen was acquired in the off-season from the Twins. Ed Brinkman was the Senators' regular shortstop from 1963-1970. Early in his career, he struggled to bat over .190 (which he failed to do in '65, '67, and '68). Once Ted Williams became the team's manager in 1969, Brinkman's average shot up to .266.

Ken McMullen was the Senators' #2 slugger with 16 homeruns - not much really for a 3rd baseman. Left fielder Frank Howard (The Capital Punisher) was among the league leaders in homeruns with 36. With the departure of Don Lock to Philadelphia, center field became a 3-way carousel in 1967, featuring Fred Valentine, Ed Stroud, and Hank Allen, with Valentine playing the most innings there. He also made 51 starts in right field. Cap Peterson was acquired from the Giants in December, and started 85 games in right.

Tim Cullen started most of the games at shortstop after July 4th, having wrested the job away from weak-hitting Ed Brinkman. Hank Allen (R) and Dick Nen (L) were the primary pinch hitters, and also got 50 to 60 starts as well. Bob Saverine was primarily the backup to Bernie Allen at 2nd base.

Jim King, the team's starting right fielder since 1962, was traded to the White Sox in June for outfielder Ed Stroud. Six weeks later, King moved on to the Indians, where he finished his career at season's end. Stroud, who made his debut with the Sox in September 1966, played 79 games in center field (including 48 starts). Ken Harrelson began the season sharing the 1st base job with Dick Nen, but after Epstein was acquired at the end of May, Harrelson was sold to the Athletics. By late August, his patience was rewarded as Ken was signed by the Red Sox (to replace the injured Tony Conigliaro in right field) as they made their way to the World Series. Doug Camilli managed to start 24 games as Casanova's backup.

Other assorted Senators: Jim French made 5 starts, mostly in the last week of the season. Bob Chance played in 27 games, but spent most of the season in AAA. His last start for the Nats was May 7th. The back of John Orsino's card says he spent most of 1966 on the disabled list. That must have extended into 1967 also, because he only played 1 game with the Senators, and 16 games in the minors. Gil Hodges managed the Senators from 1963 to 1967, then was TRADED to the Mets, where he managed for 4 seasons, including the miracle season of 1969.

All but Pete Craig played for the Senators in 1967. Frank Coggins started all 19 games after September 9th at 2nd base. Dick Nold pitched in 7 games in August and September.

Epstein, Stroud, and Allen also appeared on rookie cards in 1967.


(click on the "Team Review" label below to see other teams)
Posted by Jim from Downingtown at 11:01 PM