Juan Pizarro appeared in the rare 7th series in the 1967 set. I didn’t get this card until the 1980s, so for a long time my only Pizarro cards were from 1968 (looking surly, with a hole in his shirt) and 1969 (a capless, big-head shot). I'm impressed that this isn't a capless card, since '67 was his first season with the Pirates.

Pizarro played for 8 teams over 18 years (1957-74). He was primarily a starting pitcher for his first 9 years (seasons spent with the Braves and White Sox). After that he was mostly a reliever (except for his 1971 season with the Cubs). 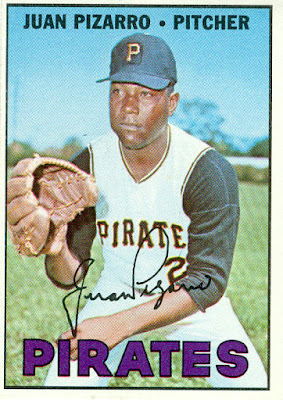 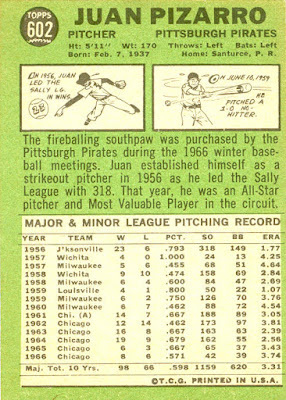 Juan was signed by the Milwaukee Braves in 1956, and after a full season in Class-A ball, he split each of the next 3 seasons (57-59) between the Braves and their AAA club. He was a swing man with the Braves, pitching behind Warren Spahn, Lew Burdette, Joey Jay, and Bob Buhl in the rotation, and closer Don McMahon in the ‘pen. Pizarro pitched 1 inning each in the ’57 and ’58 World Series.

On Dec 15, 1960 the Braves traded Pizarro to the Reds (with pitcher Joey Jay) for SS Roy McMillan. On the same day, the Reds flipped him to the White Sox for 3rd baseman Gene Freese. Juan played for the White Sox from 1961-66, and had his best seasons in 1963 (16 wins) and 1964 (19 wins). He made the all-star team in both seasons.
Juan became a nomad after the 1966 season. Traded to the Pirates for pitcher Wilbur Wood, he lasted with the Bucs until June 1968, when he was purchased by the Red Sox.

In April 1969 he was traded to the Indians with pitcher Dick Ellsworth and 1B-OF Ken Harrelson for catcher Joe Azcue and pitchers Sonny Siebert and Vicente Romo. Later that season he moved on to the Athletics, and to the Angels in early 1970.

Pizarro landed with the Cubs in July 1970, and stayed there for exactly 36 months – the longest stint in the 2nd half of his career. He returned to a starter’s role with the Cubs, although he spent part of 1971 and the first half on 1973 in the minors.

Juan played the 2nd half of the ’73 season with the Astros, then was released the following spring. He played in the Mexican League in 1974, until the Pirates signed him in late August.

Released after the season, he returned to the Mexican League for the ’75 and ’76 seasons before retiring.
Posted by Jim from Downingtown at 9:01:00 PM