Here's my first Mel Stottlemyre card. Mel was somewhat of a favorite player of mine as a kid, not because I liked the Yankees, or Mel in particular, but mainly because my earliest baseball glove that I can remember was a Mel Stottlemyre model, by Wilson. (In later years, I think I had (and still have) a Rod Carew glove.)

Mel was signed by the Yankees in 1961, and played in the minors for 3 1/2 seasons. After compiling a 13-3 record at triple-A Richmond for most of 1964, Mel made his major-league debut on August 12th, with a complete-game 7-3 victory over the White Sox. He also saw his only post-season action in 1964. 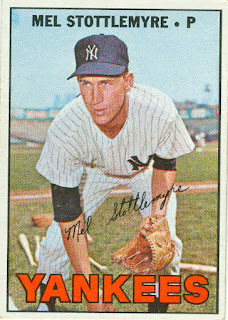 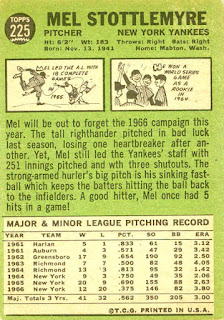 In his first full season (1965) Mel went 20-9 with a league-leading 18 complete games, while edging out long-time Yankees' kingpin Whitey Ford. His personal success didn't extend to the team, as the Yanks slipped from 1st place in 1964 to 6th place in '65.

Stottlemyre slumped to 12-20 in 1966, as the Yankees plummeted to the AL basement. They say a 20-game loser is a sign of a good pitcher, otherwise he wouldn't get the playing time.