This is Lou Clinton's final card (#426) and final major-league season.

Lou was signed by the Red Sox in 1955, and made his big-league debut with them in April 1960. Lou started more games in right field than anyone else, but he only hit .228, so the Sox sent him back to triple-A for most of 1961, this time to Seattle (where Boston's triple-A team had relocated since the Twins set up shop in Minnesota that season).

Clinton returned to the majors full-time in 1962, and took over as the regular right fielder for the next 2 seasons, peaking at 146 starts in 1963. 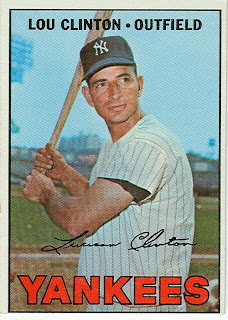 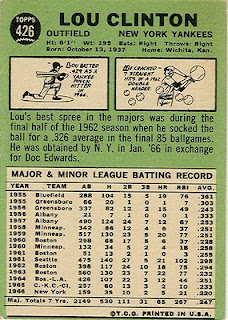 In June 1964, Lou was traded to the Angels for right fielder Lee Thomas. As in Boston, Clinton became the main right fielder, starting 83 of the 113 games after his trade.

Lou split the right field starts evenly with Albie Pearson in 1965, until he was claimed off waivers by the Athletics on September 8th. After 1 game with Kansas City, for some reason that deal was voided, and the next day the Indians took a crack at him. Lou played 12 games with the Indians for the remainder of the season, then was traded to the Yankees in January 1966 for catcher Doc Edwards.

After 80 games in 1966 (mostly as a pinch-hitter and backup right fielder), and 12 games in 1967, Clinton's major-league career was over. He played the remainder of the 1967 season with the Phillies' triple-A team in San Diego (which was also hosting former major-leaguers Terry Fox, Ed Roebuck, Dick Stigman, John Tsitouris, Dick Bertell, Jim Gentile, Bobby Klaus, Roberto Pena, and Marty Keough).
Posted by Jim from Downingtown at 12:33:00 AM